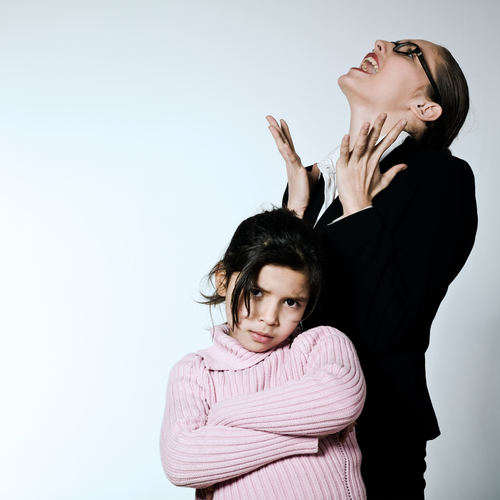 Today, when I was thinking of a topic to write about, I did what I do when I’m out of ideas; I asked one of my children. (My kids have great ideas!)

My son, who is Ten years old, said that when a child asks for something there are three ways to ask. The first is give me that. The second is whine and cry. And the third is please can I have.

He then told me that a child should really do it the third way, but if he doesn’t, then he wasn’t really sure what the parent should do!

I burst out laughing at the thought of my ten-year-old son explaining to me how kids should ideally act and how parents should ideally parent them. I just had to kiss his cheek – to which he said, “Write a blog about what to do when kids do not want you to kiss them.” (My son is feeling a little bit too grown-up for his mom to hug and kiss him too much.)

There’s Too Much Input:  I Need Less

Your child might be extremely sensitive to stimuli, and he might find it uncomfortable, threatening, or painful. If so, his sensory awareness is set on “overload.” Children who are hyper-sensitive respond to the unpleasant sensations they experience by avoidance, aggression, or other coping mechanisms.

Thus, the little girl who may appear to be painfully shy in large groups may be feeling very uncomfortable from all the motion or noise. The baby who stiffens up when caressed may find the touch too light and therefore irritating. The little boy who hits, kicks, or screams at other children may be experiencing their physical closeness, even a friendly hand on the shoulder, as uncomfortable or threatening. After-school meltdowns may be frequent, as transitions, such as that from school to home, can be overwhelming for the sensitive child.

A sensitive child may try to gain a measure of control and insist on doing things “my way or the highway.” He may feel vulnerable or exposed and refuse to wear short-sleeved shirts, or chew on his clothing or other objects. What we see on the surface—withdrawing, shy behavior, disinterest in affectionate play or touch, rigidity, or aggression—are actually messages
the child is sending us, if only we know how to interpret them and how to help.

Admittedly, it can be confusing. Different children exhibit similar behaviors for different reasons. The boy who pushes, hits, or yells might be saying, “Hey, you’re giving my brain way too much information—I’m overloaded and I can’t cope.”

Or, he might be saying, “I need more sensory input!”

—Excerpted from The Parent-Child Dance: A Guide to Help You Understand And Shape Your Child’s Behavior by Miriam Manel, OTR/L of Thrive Occupational Therapy and C.R. Zwolinski (OT Thrive Publishing, 2014)

Some children have a grave sensitivity to touch. Touch might include a tap on the shoulder, brushing the hair, materials on their skin, wet, cold, heat and of course hugs and kisses.

Alisa*, a teenage girl I worked with, had this problem since she’d been an infant. She simply would not and could not allow her mother to hug or kiss her. Naturally, this was painful to her mother, and she responded by estranging herself from Alisa.

This went on until Alisa was seventeen. At that point, her mother brought Alisa to see me and she began to understand that her daughter’s skin was extremely sensitive. Alisa wasn’t pushing away her mother emotionally, only physically. But, it certainly felt to her mom that she was being pushed away both emotionally and physically.

Once Alisa’s sensory disorder was explained, her mother learned to only come close after first asking permission. Finally, at the age of nineteen, after one to one-and-a-half years of occupational therapy with me at Thrive OT, this lovely, sensitive girl began to be able to accept touch. She was able to sit in close proximity to others and receive (and even give) deep pressure hugs.

When I teach, whether at a school, college, or other program, I often ask for a volunteer.

I always ask them: Are you okay if I touch you?

Touch can feel extremely invasive or otherwise unpleasant to some people.  If the hug-free zone is around an acquaintance, it usually doesn’t feel like we’re being rejected. But when a child or other family member has a sensory issue that makes touch unpleasant for them, it can feel like rejection at its worst.

Understanding, that it’s not you, it’s the other person’s sensory system, can feel like a big relief.  This understanding is important if you want to build a loving relationship with them. And getting them the help they need, so that they are able to experience a wider range of human expression and love, is vital.